Since 2008 I have been fastidiously cataloguing my father’s work. Whilst he was best known for his paintings that extended the Scottish Colourist tradition, his style was constantly evolving throughout his career. The early works, to be shown here soon, will highlight a diverse range of approaches including a significant pop art influence. This early work was undertaken whilst studying Drawing and Painting at Glasgow School of Art (1963-’67) and the successive years after he graduated.

Hamish MacDonald is now widely regarded as one of Scotland’s most successful contemporary artists. Since 1964, Hamish has staged numerous solo exhibitions in Scotland and Cornwall. He also participated on group shows with prominent galleries in London and throughout the U.K. His works can be found in major collections throughout the world. 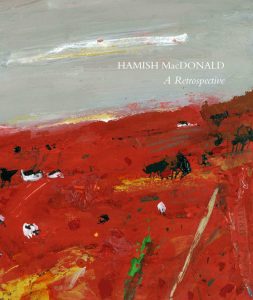 ‘A Retrospective’ Hardback Book
Currently Out of Stock